I couldn’t help but think I was going to stick out like — gasp — a city girl at the grand opening of TI’s new Gilley’s Saloon, Dance Hall and Bar-B-Que.

I don’t own cowboy boots or a cowboy hat. I don’t know the difference between Kenny Chesney, Keith Urban or even Garth Brooks, and I most certainly don’t know how to dance to their music.

I was a little hesitant.

Looking around, it was clear that most of Gilley’s patrons got the memo and showed up in their country-western finest. But there were a few who looked like they just happened upon the place. Maybe they heard the loud country music and yee-haws, became interested and walked on in — a big possibility since TI’s Gilley’s has an outside entrance that leads straight from the standing area of Sirens of TI. In fact, while the four shows of the evening are performed, Gilley’s customers can actually hear the cannons fire.

Pirates and cowboys — now that’s kind of a weird mix.

“We’re not trying to mix the two [pirates and cowboys],” David Modelo, Gilley’s general manager, said. “Instead, there’s just a couple different concepts, and really you get the best of both worlds.”

In every detail, Gilley’s screamed true country-western style. From the décor — wood-planked walls, life-sized statue of Jack Daniels, mechanical bull — to the people, dressed in their country-western finest, line dancing, riding the bull and guzzling bottles of beer, folks were getting a real down-home experience. 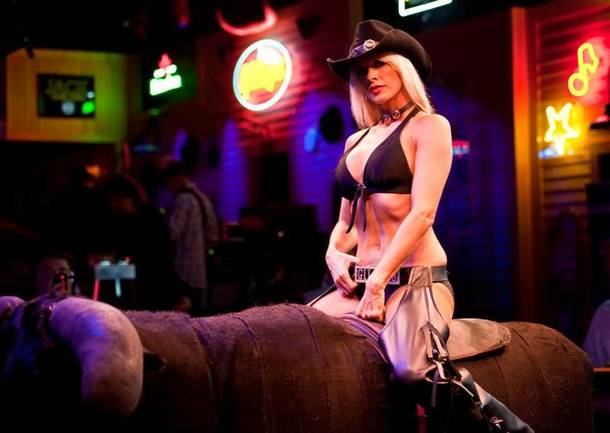 After navigating through the sea of cowboy hats, boots and belt buckles to one of the two bars, I was greeted with a saddle bar stool. I’ve never climbed atop a saddle, so this was definitely a first, and a little uncomfortable initially. But after a few minutes, I felt like a natural.

My boyfriend ordered us a round of Bud Lights. Not much of a beer drinker, I looked at him inquisitively. “It’s a country-western bar, you gotta have a beer,” he responded. I was glad one of us knew the rules.

The vibe sucked me in. The people-watching and beer-drinking might have had something to do with it. But the saddle bar stools, the bull-riding, the music and the dancing might have also been to blame. And no matter what I was wearing, what kind of music I ordinarily listen to or what kind of cocktail I usually drink, I felt like a natural cowgirl. By the end of the night, even I was out on the dance floor, surrounded by cowboy hats, boots and larger-than-life belt buckles, wailing out the 10 words I know of “Friends in Low Places.”

I guess there’s a little country-western in us all.