When interviewing Lily Tomlin, a character comedian, it’s hard to know what to expect. Will her character Ernestine take over the interview? Will the innocent child, Edith Ann make an appearance? Will Sister Boogie Woman feel the boogie and go into a trance?

But what makes Lily Tomlin a unique character comedian is that she doesn’t feel that she is playing these fictitious characters, she speaks of these characters as if they were real people.

“These characters were real to me, and they still are in many ways. I mean they do have their own lives. So many people imitated Ernestine, that I used to say that she was like Betty Davis, and I was just one of the people who imitated her.”

Getting all these characters to come together at the same time and the same place, is close to impossible, but will soon be a reality for Las Vegas audiences.

For the first time ever, Lily Tomlin will be setting a Las Vegas stage for some of these classic characters to make an appearance. From November 10-18, the actress and comedic genius will be performing at the MGM Grand’s Hollywood Theater and will be taking the Las Vegas audience on a blast to the past, with some of Tomlin’s most famous characters. 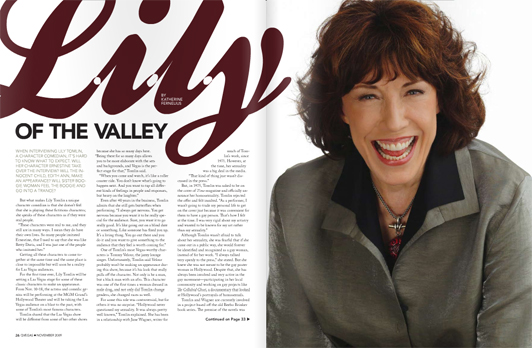 Tomlin shared that the Las Vegas show will be different from some of her other shows because she has so many days here. “Being there for so many days allows you to be more elaborate with the sets and backgrounds, and Vegas is the perfect stage for that,” Tomlin said.

“When you come and watch it’s like a roller coaster ride. You don’t know what’s going to happen next. And you want to tap all different kinds of feelings in people and responses, but heavy on the laughter.”

Even after 40 years in the business, Tomlin admits that she still gets butterflies when performing. “I always get nervous. You get nervous because you want it to be really special for the audience. Sure you want it to go really good. It’s like going out on a blind date or something. Like someone has fixed you up. It’s a living thing. You go out there and you do it and you want to give something to the audience that they feel is worth coming for.”

One of Tomlin’s most Vegas-worthy characters is Tommy Velour, the jazzy lounge singer. Unfortunately, Tomlin said Velour probably won’t be making an appearance during this show, because it’s his look that really pulls off the character. Not only is he a man, but a black man with an afro. This character was one of the first times a woman dressed in male drag, and not only did Tomlin change genders, she changed races as well.

For some this role was controversial, but for others it was no surprise. “Hollywood never questioned my sexuality. It was always pretty well known,” Tomlin explained. Tomin has been in a relationship with Jane Wagner, writer for much of Tomlin’s work, since 1971. However, at the time, her sexuality wasn’t a big deal in the media. “That kind of thing just wasn’t discussed in the press.”

But, in 1975, Tomlin was asked to be on the cover of Time Magazine and officially announce her homosexuality. Tomlin rejected the offer, and felt insulted. “As a performer, I wasn’t going to trade my personal life to get on the cover just because it was convenient for them to have a gay person. That’s how I felt at the time. I was very rigid about my artistry and wanting to be known for my art rather than my sexuality.”

Although Tomlin wasn’t afraid to talk about her sexuality, she was fearful that if she came out in a public way, she would forever be identified and recognized as a gay woman, instead of for her work. “I always talked very openly to the press,” she stated. But she knew she was not meant to be the poster gay woman in Hollywood. Despite that, she has always been involved and very active in the gay movement – participating in her local community and working on gay projects like The Celluloid Closet, a documentary that looked at Hollywood’s portrayals of homosexuals.

Tomlin and Wagner are currently involved in a project based off the old Beebo Brinker book series. The premise of the novels was lesbian culture during the 1950 and 60s, but Tomlin and Wagner are writing it so it includes more of the gay and lesbian lifestyle. The pilot is done and the ladies are pitching it to HBO, but Tomlin wasn’t sure what the future was at the time of the interview. “I hope it goes,” she said. “But you never know. Things can change on a dime.”

Along with working on this project, Tomlin has other projects in the works. She has been a guest on the ABC–hit series Desperate Housewives, and a spin-off with her and Kathryn Joosten is in the works. Additionally, a network is interested in a series starring Edith Ann. “People are always interested in my characters, especially Edith Ann,” Tomlin said. “I really hope she gets a job.”

With stage performances, television, online writing and other side projects, balance is something Tomlin has had to master in her life. “[I’m] lucky,” Tomlin said. “Here it’s been 40 years that I’ve been working in the business, and it’s gratifying to perform and make up stuff and have an audience that enjoys it or reciprocates and you share ideas and you validate them and in turn you are validated. It’s a good thing.”

The MGM is lucky to have such a talented, hilarious act come to town for eight nights. Tomlin has been performing for the past 40 years, yet she still loves it like she was a child making her debut. “Even as a kid, I was putting on these shows. If I thought something was funny or interesting or moving, then I wanted other people to see it. I thought it was important. Here I was eight or nine years old, and I thought it was important that they learned what I was thinking about. But just to entertain them and that connection I must have wanted it or needed it in some way. And I’ve continued feeling that way.

“It’s like starting over each time. You don’t know what’s going to happen … I just want to have fun and impart that fun to the audience, and resonate in some way on a deeper level, to feel more human … I like all different colors. I like it to be outrageous and zany and crazy and I like it to be soft and illuminating and tender. “

Vegas is in for a wild ride. Lily Tomlin will be performing at the MGM Grand Hotel and Casino’s Hollywood Theater from November 10 through November 18th. Tickets are on sale now.