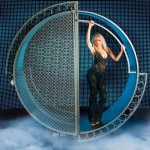 After a 10-year hiatus, the First Lady of Magic is back to reclaim her title

Melinda The First Lady of Magic was an iconic magician in the era of big hair, neon colors and smoke machines. And in Las Vegas, that era lasted from the ’80s to the early 2000s.

But to see Melinda Evensvold (née Saxe) at the height of her fame, we look back to her eponymous Disney special. The year was 1997, and the hourlong show, which aired on CBS on a Friday night, showed a magician who looked more like a magician’s assistant. She had long, blond hair and at least a dozen costume changes, including evening gowns, body suits and the slitted dress of cartoon sex-symbol Jessica Rabbit (hey, it’s Disney). Through narrative and dance, Melinda wrapped her magic in an elaborate story about an imagined girl magician who lived in a castle. Melinda did traditional tricks, such as making her Pegasus disappear, but she also performed extraordinary illusions, such as being stabbed through the stomach and lifted by an 8-ton industrial drill.

Melinda’s unique mix of magic, dance and sex appeal (or as People magazine called it, “Saxe appeal”) propelled her to headlining shows at seven hotels, including the Landmark and the Venetian, multiple TV specials and appearances on Oprah and The Tonight Show, not to mention a brief yet highly publicized marriage to magician Lance Burton. Then, in 2002, when she was one of the most famous magicians in the world, she retired to have a family.

David Saxe, Melinda’s younger brother and producer, knew it would only be a matter of time before the girl who danced in Siegfried & Roy at 17 and headlined her first magic show at 20 returned to the limelight. “Melinda was born to entertain. Since we were kids, she just loved to be onstage. So I was just waiting for the day that she would tell me [she wanted to perform again].”

That day has come. Ending her 10-year hiatus, Melinda launched her comeback with a 15-minute act that premiered in November in V The Ultimate Variety Show in the Miracle Mile Shops at Planet Hollywood. But Melinda did not return to perform as just a part of a show. She wants to star in her own.

It won’t be easy. Even in her time of triumph, Melinda endured critics who bashed her for relying on her looks and accused her of being nothing but a pretty face. For example, in a review of her Disney special, Steve Johnson, the Chicago Tribune’s television critic, noted her complicated relationship with her gender: “The special is quite comfortable placing her in traditional showbiz sex-kitten roles. It looks to me more like the stereotypical comely assistant grew tired of watching the guy with the wand get all the applause and money.”

However, at least one entertainment writer disagreed. In a review, that was published on iGoShows.com just before Melinda announced her retirement, Chuck Rounds wrote, “Magic is still truly a Boy’s Club, and generally, in a situation like that, a woman has to be at least twice as good as her male counterparts to achieve the same amount of praise. … She has nothing more to ‘prove.’ I just want to see her perform.”

Today, Melinda is out to defy another societal perception: that female performers have a short shelf life. (Male magicians, such as Penn and Teller, who are in their 50s and 60s, respectively, have not faced this obstacle.) Melinda says her “age is the best-kept secret in magic,” but here’s a hint: A 1988 People magazine article listed her as 23. No matter, after 10 years out of the spotlight, Melinda will once again have to prove herself—this time as an aging woman of magic—and turn her qualities into her new niche.

Fortunately, Melinda is not the dumb blonde some critics thought she was. She understood that her look had to change—gone are the days of teased hair and skimpy costumes. Soft curls now frame her face. And just like the old days, Melinda’s not afraid to show some skin. But today it’s a bit more glamorous and age-appropriate. She sports a black glittery halter-top and matching boot-cut pants, and halfway through her act, she swaps the pants for a short, silver gypsy skirt to match an Arabian-themed illusion.

In addition to a new look, a new act was a must. Because of the changes, her return to magic was a two-year process. “The timing had to be perfect,” David says. “And I told her, ‘If you’re going to come back, you have to be better than ever, stronger than ever, and we need the very best act.’”

“So far, the audience seems to love it,” Melinda says of her new act. And she appears to be right. Melinda is currently the only magic act in V The Ultimate Variety Show, and she fits in perfectly with the other performers.

Melinda is still the spunky, fun and glamorous performer who dances around while doing illusions, but her act is updated. The props are modern, Melinda is modern, and the illusions are impressive—making herself appear and disappear out of different contraptions and trapping one of her sexy assistants inside a see-through box and then—voilà—Melinda is in the box.

Most importantly, it’s a show that her kids, Mallory, age 4, and Mason, age 8, can enjoy. “One of the main reasons I came back to magic was so that my kids could see me perform,” Melinda says.

As a child, Melinda would often accompany her mom, a dancer in Les Folies Bergère, to the Tropicana to watch her rehearse and perform. Her father was a bandleader, and she loved being surrounded by showbiz. Now, she has the opportunity to show her own children the scene, and perhaps even make them a part of it. “I would love to incorporate them into a show,” Melinda says, perhaps hitting upon her new niche. “Maybe do a fun family show or magic show with kids.”

So what are the chances of Melinda getting her own show? Her brother/producer David thinks she has what it takes. “Entertainment is tough. Vegas is tough. The economy is tough. Being a woman is tough. Being an aging woman is tough,” he says. “She could have so many reasons to be worried. But what’s awesome is that by not worrying, by just being herself and doing her own thing she is going to end up great again.”