Published in the Las Vegas Weekly Thursday May 12, 2010

In the name of free champagne, I braved it. I guess I will do just about anything for a night of free drinks, including showing up at a club in my unmentionables.

As if narcissism wasn’t enough, Vanity—the nightclub in the Hard Rock that revolves around its placement on the list of Seven Deadly Sins—threw lust into the equation with its Lust Lingerie Party, flaunting free champagne for girls dressed in their nighties.

I chose something tasteful but revealing enough. Something that I thought would put me in the middle ground—not dressed-down to bra and panties but not fully dressed, either. 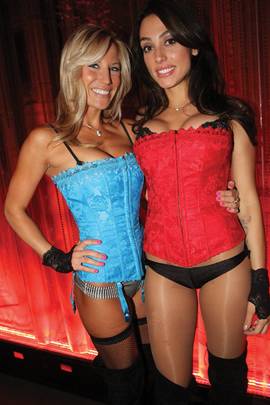 Noticing the scarcity of women in their negligees, I was certain I would have an unlimited supply of free bubbly.

So when the doors opened and we made it inside, I ordered my first flute and asked the bartender, who was dressed in lingerie along with all the other female Vanity employees, if she thought more ladies would show up in their naughty nighties.

“You’d be surprised,” she said. “Girls want any excuse to dress up like sluts.”

Ouch! Not me—I was interested in the free drinks, I swear! And though I was technically in lingerie, there were women there in actual “clothes” that were exposing far more than me.

But there were some girls there that seemed to fit the bartender’s theory.

“We didn’t even know there were free drinks,” said one lingerie-wearing girl who arrived with friends. “We just like any excuse to dress up.”

I guess I was the only one concerned with the free drinks.

By 12:30, the place was packed with men and women—most of whom opted for regular club attire.

Free drinks aren’t everything to everyone, I suppose. Maybe I should have considered this before showing up at a lingerie party in my lingerie.