Published in the Las Vegas Weekly Thursday May 5, 2010

I opted for a black dress and heels. Figured I couldn’t go wrong with that. But when I arrived at Studio 54 inside the MGM Grand—the location of Floyd “Money” Mayweather’s post-fight bash—I realized that I was practical but totally underdressed.

There were two events going on—the party inside the club and the sea of people just outside the doors. Both groups were big, boisterous and urban. The people inside were having the time of their lives. They were dancing, drinking and about to live it up with the champ. 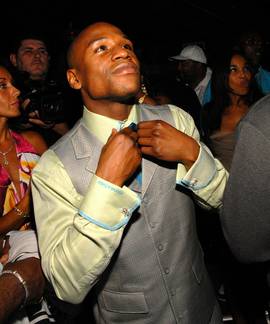 But the people outside were waiting in lines similar to what you’d expect at Disneyland. The kind of lines that wrap around and loop for what seem like miles before getting to the door. The girls, in their 6-inch stilettos, weaves and skin-tight outfits—which I was now glad I avoided—were uncomfortable and sore and anxiously waiting to join the party.

Around 12:45, professional boxer Zab Judah made an appearance on the red carpet. Floyd Mayweather Sr. was next, followed by what looked like Mayweather Jr.’s posse. All these people walked right past the general admission queue to get into Studio 54. That long line turned out to be the best seat in the house.

Instead of “Let me in! Let me in!” it was “Maybe I’d like to stay here for a while longer.” The girls started re-strapping their shoes to their feet. They fixed their hair and reapplied their cherry-red lipstick. They were ready to see the man of the night—and hoping that he would see them back.

Mayweather made his appearance at 1:15 a.m., and the outside crowd was elated. Cameras flashed and girls screamed.

Mayweather and his bodyguards walked the red carpet, stopping to pose for the cameras and answer a few questions. How he looked so fresh after fighting 12 rounds, I will never understand.

After the red-carpet commotion died down, the boyfriend and I made our way inside. Outside the club, I was comfortable and practical. But inside, where the 6-inch stilettos, weaves and skin-tight outfits were the unspoken dress code of the evening, I felt definitely sub-par.