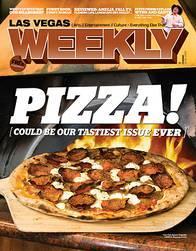 Who’s behind the ‘God’ billboard along I-15?

In Sin City, it is no surprise to see billboards with scantily clad women that read “Totally Nude” or “Topless Club.” But not even a mile from some of these establishments is a billboard with a different message.

“Jesus,” one side reads. The other side says “God.” This double-sided billboard has displayed many religious messages over the past 15 months: “I am the Alpha and Omega.” “I am YHWH … who brought you … out of the house of slavery.” “With our thoughts we make the world. –Buddha.”

The billboard, owned by Ad America, is at 2310 Highland Drive, and for 15 months it’s been used by the Light of Peace Project.

“Light of Peace is a project that we are going to unveil internationally that brings all people together through prayer in their own religions, in their own way,” said a spokeswoman for Light of Peace, who wished to remain anonymous. “The thought process is if we all get together and think about peace, and pray for it, then we can accomplish it.”

These billboard messages are just a snapshot of what is to come, as the organization is still in its infancy, she explained. Although it has been advertising for more than a year, the billboards are actually a prelude for the organization. “We wanted to get people thinking about spirituality … we aren’t here to preach … but to evoke spiritual thought and acceptance.” The “God” billboard is at 2310 Highland Drive and located within a mile of five different strip clubs. Photo: Ryan Olbrysh

Ad America has received countless phone calls about the billboards. “Ninety-five percent of the calls have been positive,” said Toni Rose, senior vice president for Ad America. She added that people call to say it’s a good reminder and are appreciative. Others don’t like it and want to know why it’s up.

“We definitely don’t have an issue with these billboards, and we’re definitely not against it,” said Gordon Gust, owner of A Special Memory Wedding Chapel, two miles away from the billboard. “Those people pay for that billboard and can say whatever they want, and people really shouldn’t be offended by it. They have represented a multitude of religions, and it’s not like they are saying, ‘Believe in Jesus or die.’”

Ironically, the most prevalent Sin City industry near the spiritual billboard is strip clubs, five of them sitting less than a mile away.

“Do we really need an advertisement for religion in this city?” Ajli Troy, an employee at Little Darlings, an all-nude club, asked. “I seriously thought it might be some kind of guilt trip for the people who come here.”

Although the Light of Peace Project has a positive message to share, that message is not entirely clear to the billboard’s viewers.

“I had no idea that’s what the billboard was supposed to be,” Troy said after hearing about the goal of the LOP Project. “They need to work on making that more clear.”

The LOP Project’s intentions are peaceful, but until its launch, many “sinners” may not find religious union in its message.