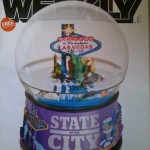 Armed with a photographer, a camera man and a few of their entourage, the Sin City Socialites were Downtown, at the newly remodeled Beauty Bar, shooting some nightlife footage for the pilot episode of a reality TV show they hope to star in.

The crowd, at 8 p.m. on a Friday, was sparse, but the night was young, and Juliette Watkins, 25, and Lauralie Ezra, 26, were ready to capture some Socialite-worthy footage doing exactly what they do best: socializing, drinking and critiquing, all while in 4-inch stilettos.

The girls were in their Socialite finest. Both dressed very fashionably, one sipping a Shirley Temple and the other a concoction of vodka, cranberry and Sprite, while reminiscing about Lauralie almost getting in a fight with her friend’s “ish-boyfriend.”

Conversations of this nature were had throughout the night, with a strong presence of giggling and words such as “like,” “really” and “holla” running rampant.

Although the substance didn’t run too deep, the setting, conversations and people were just like something I could see on MTV’s The Hills, The City or any other popular reality show today. But beyond that, these girls might actually be onto something.

The Sin City Socialites started six months ago when Juliette and Lauralie, both locals, had a few very bad experiences out on the town. They were furious at the service and treatment they received and wanted to warn others. “We just wanted to have a voice,” Juliette told me. So the two started a blog to detail their experiences and rate establishments using their own “Fab” point system. On a one-to-three-point scale, the girls look at everything from customer service, cleanliness, friendliness and quality. They take photos, interview employees, shoot video if permitted, and post it all on thesincitysocialites.com. They do this with everything from restaurants to nightclubs—even sports gyms. Studio 222 currently has the highest Sin City Socialite rating, with an unprecedented 3.5 Fab points.

Unsure how the blog and Fab points will fit into the reality show, the girls are mainly looking for more recognition.

“It’s all about exposure,” Juliette said. “So the more people we know, the more capable we are at doing the things we want to in the future.” Which the Socialites told me includes opening their own venue, working in fashion, and doing philanthropic work for Las Vegas.

“Right now we have to explain who we are and what we do in order to do anything,” Lauralie explained. “We want to get to a point where people just know who we are.”

A reality show could certainly open those doors. The girls are currently in discussions with two major networks and hope to have something in writing in the next couple of months.

“We’re just rolling with the punches right now,” Juliette said. But until they hear the final word, the Socialites will continue being and doing what they do best—being “Las Vegas locals. Critics with true opinions. With a dash of sass.”