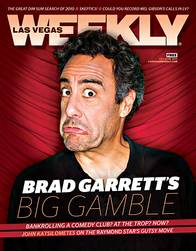 Who knew a straight couple could have as good a night—if not better—at an “alternative lifestyle” club than at any other? I’d never been to Krave before Saturday’s Moulin Rouge 2 event, and now I’m questioning why.

I mean, really, can a girl’s night get any better? I was in a club with my boyfriend. Attractive strangers were coming up to tell us how fabulous we were. I was watching male go-go dancers, a first for us both—all set to the scene from one of my favorite pop musicals, Moulin Rouge. Add in drag queens, great music and strong drinks, and a night in Las Vegas doesn’t get much better.

The Moulin Rouge-themed party isn’t new to Krave. This is actually its second year (hence the “2”). The event was such a hit in 2009, organizers decided to make it an annual extravaganza. Once again they were successful. The entertainment was ample. The night was full of drag queen performances, aerialists, stilt walkers, magicians, clowns and a little green fairy passing out free drinks. “We decided on the Moulin Rouge theme because we loved it,” said Krave marketing rep Tyler Caiden, who hosted the evening as Moulin Rouge’s Harold Zidler. “We thought gay people would like the theme because they love musicals, and straight people would like it because it’s just a cool idea. It seemed like it would appeal to everyone.”

Caiden was right. The club drew an eclectic mix, and everyone seemed to be enjoying the atmosphere and entertainment. We both left thoroughly entertained, sufficiently liquored and quite flattered by all the nice things other clubbers said. I got called fabulous, and my boyfriend got hit on.