Walking in to P.J. Clarke’s in the Forum Shops at Caesars, your eyes scan the black-and-white photos that plaster the walls and the crisp white linens draped perfectly over the dark mahogany wood. With the dirty martinis and Manhattans sitting in front of the patrons at the bar, you’d expect a thick cloud of smoke and the smell of fine cigars—and there probably would be if it were allowed. Behind the 125-year-old carved, hardwood bar stands Woody Linihan. Even without knowing him, he just seems to fit: His salt-and-pepper hair, soft weathered face and smart white-collared shirt invite patrons over for a drink. 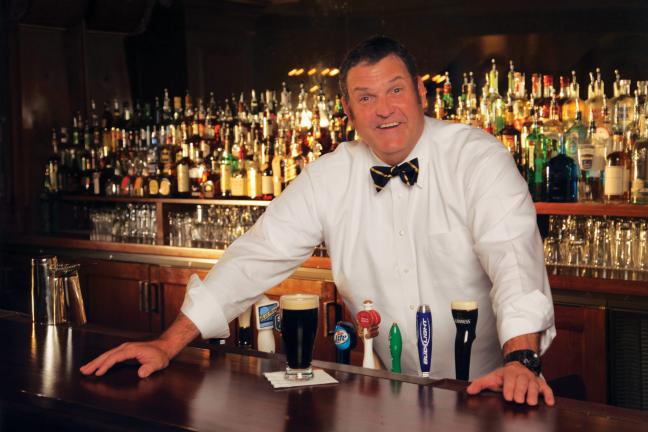 Born and raised in Las Vegas during the 1960s, Linihan has not only seen the city change, he’s witnessed the bar scene transition from classics such as Sidecars and Sazeracs to today’s craze of vodka Red Bulls and Patrón shots. But having started in the Las Vegas bar business back in 1985, when he was freshly legal, Linihan was trained by old drink masters who worked the bars on the Strip (possibly serving the likes of Frank Sinatra and Dean Martin) and knew a thing or two about cocktails and good conversation. At that time, Linihan didn’t know much about either.

“I didn’t know a whole lot about the drinks,” he says. “And I knew even less about actual bartending. … It was a different scene back then. There weren’t mixologists, and people weren’t asking for these [avant-garde] cocktails that are so popular today. People wanted a classic cocktail and they wanted a real bartender.”

Linihan knows the bar like the back of his hand, grabbing shakers, glassware and bottles of liquor without a second glance. If he’s got four people or 20 seated before him, he knows their drink, can chime in on the conversation when appropriate and shuffles back and forth from one end of the bar to the other like some mastered dance, and he never misses a beat.

Behind the bar he’s all classic cocktails and old-school bartending. But as much as Linihan has a passion for old-school bartending, when he’s not muddling Old Fashioneds or shaking Aviations, Linihan’s focus is on being a good father to his two teenage kids and fly-fishing. For Linihan, nothing’s better than being out on a body of water, sitting in the boat he crafted himself, casting his line. “Fly-fishing gives me some balance,” he says. “I work in a bar, in the city. It’s like adding vermouth to a martini—it takes the sting out of it.”

Linihan himself, much like P.J. Clarke’s, is a true throw back to classic Americana. He appreciates simplicity, a good conversation and a bit of history.

“Look around at the photos,” he says while crafting one of those Aviations. “If there’s someone you don’t recognize, it’s probably because it’s one of the employee’s past loved ones. This one right here,” he says, pointing to a picture that hangs on the wall next to the bar, “that’s my mom.”

“Woody is your good ol’ American bartender,” says Jason Villafana, general manager of P.J. Clarke’s. “He’s a bartender that will talk to you and give advice. He’s a craftsman behind the bar. [Anyone who sits there] knows who Woody is.”