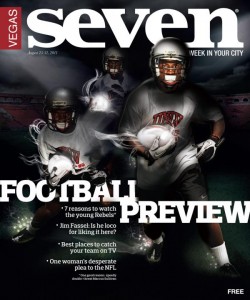 What happens when a mild-mannered man mixes drag and psychic powers? A Vegas stage show, of course!

Backstage at the Clarion’s Wolf Theater I met what looked like a member of the stage crew. The man had a shaved head, sweatpants and a flannel shirt with cut-off sleeves that revealed beefy tattooed arms. Never in my wildest dreams would I have imagined his imminent transformation.

“Can you give me about 10 minutes?” Scott Weston asked demurely as I sat down in the dressing room.

In the amount of time it would’ve taken me to don a pair of tights, Scott returned with a few “improvements” to his outfit: His flannel shirt was unbuttoned, exposing his lacy stuffed bra and the elastic waistband of his nude-colored stockings. For the following hour, I watched as Scott morphed into Cashetta, his drag-queen persona and supernatural star of Cashetta, The Extra Large Medium. 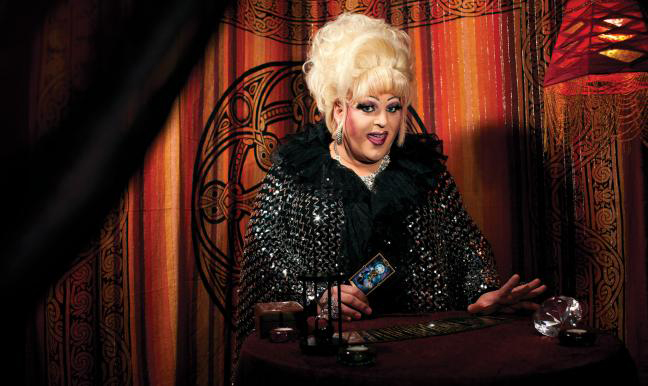 During her new show—a spirited underdog among corporate Strip entertainment giants—Cashetta does not try to convince anyone that psychics are real. Nor does the 6-foot-8-inch queen (including heels and hair-height) try to convince anyone that she’s really a woman. She mocks her psychic abilities and lampoons the fact that she’s really a sweaty man in a bird-seed bra that could sprout at any minute into “chia tits.” It’s this energy and humor that make the audience forget about skepticism and enjoy the fun of a one-(wo)man performance that’s all about can-do kitsch. But first, he has to become a she.

While applying a thick layer of bronzer to his face, neck and chest, the 40-year-old reminisced about his days as a young boy in theater. “I knew I always wanted to be doing something onstage, and everyone else knew that’s where I belonged, too. But I was bored with the roles and the wardrobes the men had. I wanted to do something different.”

Scott discovered that “something different” when he first started playing with drag—which then consisted of a bit of makeup and his friend’s mom’s overcoats and hats—as he partied in the New York City club scene at age 16.

Back in the Vegas dressing room, the layers of makeup got thicker, and the drag queen started coming to life. Scott applied false eyelashes, one of the final steps in the metamorphosis. The right one went on the first try, no problem. The left one, however, was resisting arrest.

“Come on you little bitch,” a feminine voice ranted. The timber and vocabulary change was palpable. Cashetta was in the house. To Scott, Cashetta is merely a more sensational version of himself. “Cashetta and I are the same. I don’t usually think of her as a third person. She is me. She is just a more fabulous me, and she gets away with a whole lot more than I ever would.”

As I waited for Cashetta to get dressed and situate her headpiece, I spoke with Rob Burton, the Wolf Theater’s box office manager. Burton sees the duality a little differently. “I don’t think it’s conscious to Scott anymore, but I think there is a distinct transformation from Scott without makeup to Cashetta with the wardrobe and makeup. There’s a difference. I can’t completely describe it.”

Burton told me about a recent event at the Clarion that was a bit dull. When Cashetta, who had been walking the casino floor, saw what was going on, she jumped onstage and started MC’ing. “There was just so much life,” Burton said.

I saw her vivaciousness firsthand. There’s no doubt that Scott has personality—he’s a gay man from New Jersey who’s been studying tarot since age 14. Enough said. But, as Burton tried explaining, Cashetta’s personality is different. She is fearless. She is overly confident. And she does, in fact, get away with more than anyone would. And she never apologizes for it. She simply tells an outrageous joke, makes you laugh and moves on.

“This is a true Vegas psychic show,” Kelly Gottlieb, a local substitute teacher, said of the performance, which includes comedy, psychic challenges, a live psychic Q&A, and a little singing and dancing. “I didn’t walk in totally believing, but the show was great and she was pretty convincing. She is perfect for Vegas.”

The show has been at the Clarion since May, and draws about 25 to 75 people each night. “We’ll see what happens in the next couple years, but right now, I’m really happy here.” Cashetta said. “I am headlining my own show. I’m doing what I love, and I think people are liking it.”